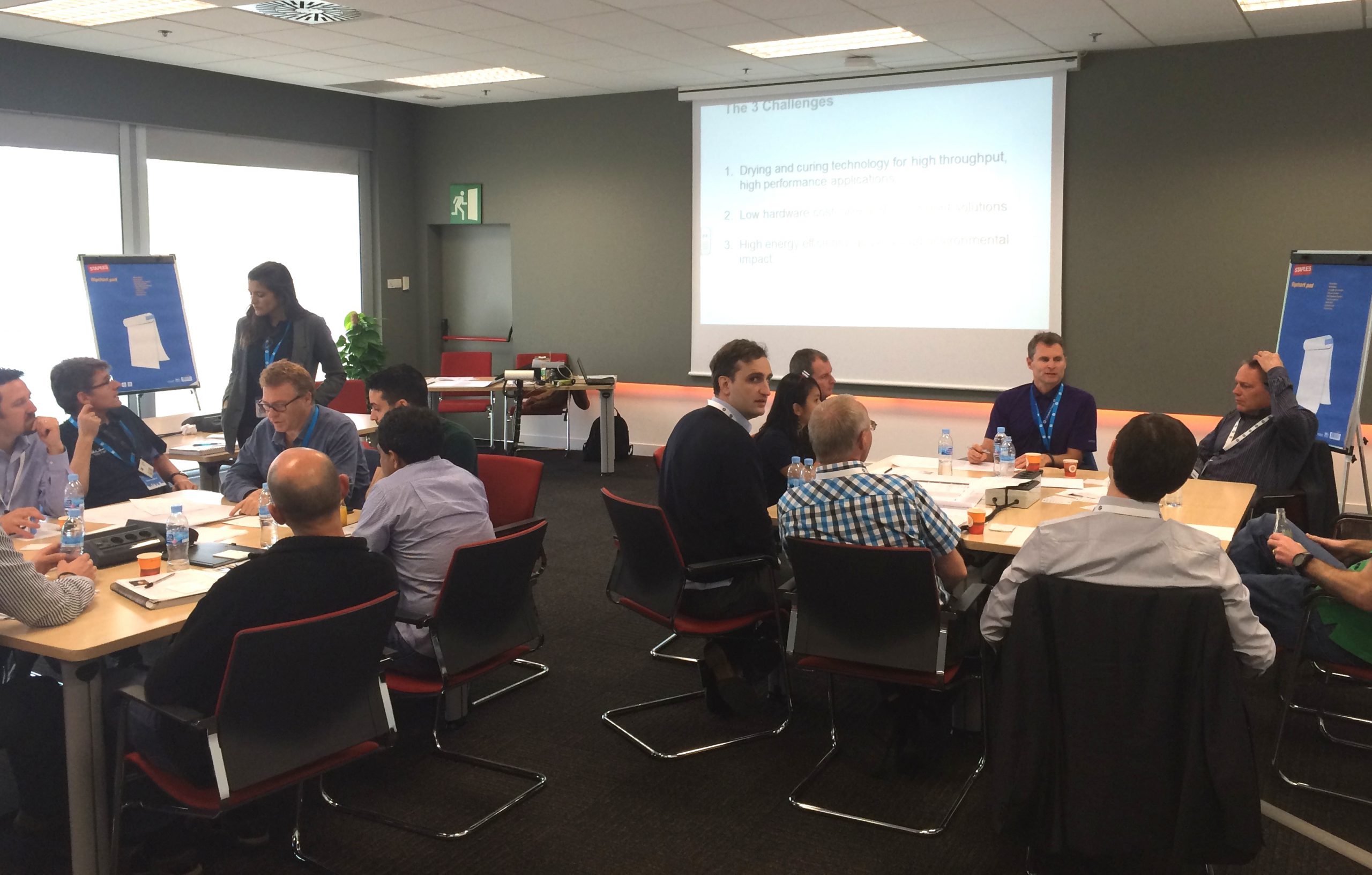 When a client of ours asked us earlier this year, if we could help them with an interesting event they were planning around their particular interests in innovation, how could we refuse?

The client in question was a large multinational manufacturer of high tech goods and the event planned was essentially an internal conference for its worldwide personnel around the broad subject area of “Heating and Drying”. What was really innovative though was that the client wanted to attract and invite a number of senior technologists from non-competitive companies that shared the challenges it faced in this broad subject area. The idea was to engage with innovation champions from these other sectors who faced similar challenges and maybe, just maybe, we could all learn from one another. Novel? Yes, probably, but certainly innovative and without doubt a little brave too! Strategic Allies Ltd was keen to take on the challenge.

The logic was definitely sound though. Heating and Drying is possibly as relevant to a company concerned with the drying properties of coatings for offshore oil platforms and the like as it is to a company manufacturing dried pasta for example or producing paper or packaging media or even companies whose products cause heating and drying like hair dryers or washing machines. The trick was to create the right content and agenda to attract such companies and to then, through the environment and each personal interaction, to cultivate “trust” during the event to hopefully allow cross sector cooperation to occur.

The content and associated agenda were mainly set by the SAL client who had recruited many of its suppliers into the event at an earlier stage. These guys were charged with presenting the new ideas they were currently working on. Not current products, but those really new things, hopefully emerging in the next 3-12 month. SAL complemented this content by introducing other SME companies with really innovative technology in the area but who were not current suppliers of our client. The agenda was intended to be varied and stimulating, taking in presentations from these tech-supplying companies but not just technology alone. An academic insight into work in this area from two prominent universities was planned plus, and here was the significant innovation, each non-competitive company, in addition to SAL’s client’s personnel, was to present briefly upon its challenges and possible routes to solutions in this broad subject area. The environment was to be that of “relaxed” conference and an important stimulating part of that was an exhibition area where the technology companies could demonstrate and talk comfortably with attendees.

In any event like this IP is always raised as an issue. My personal view is that it is an issue to be confronted but it often becomes an issue to ensure such events as this remain ideas and never actually occur! How did we deal with the IP issues? Well, in advance of the event, a simple IP agreement was signed by all attendees stating that anything “shared” at the event was thereafter considered to be non-confidential. This was signed without significant question and without alteration. Maybe things can be achieved? This allowed each individual to decide “what” and “when” and even “if” to share their particular proprietary assets.

What was the aim of the event? Well wouldn’t it have been fantastic if we could have resolved our industry’s problems in one two-day conference. But we all know this would be a totally unrealistic aim. What we wanted was to start groups, around shared problems, that may work together in the future to mutual benefit. To accomplish this aim building trust was imperative alongside a shared knowledge of the common problems faced. IP and other very important commercial considerations could follow on after.

The event took place in April this year and was widely acknowledged as “extremely successful” by attendees and organisers alike. For me the most valuable part of the event took place on the final morning when, after all the “get to know my problem” presentations had been completed the non-competitive companies and our client’s technologists worked together, in a brainstorming session, to identify current shared problems and possible solutions. Four tables with mixed participants, thrashed out what were the main shared problems and identified who had “intellectual assets” that could be used to address each. Forty-two projects were identified and SIX gained sufficient cross sector support for them to have an ongoing life and support network after this event! Will they result in significant solutions eventually? Well that will be the real indicator of success or not won’t it. I think joint solutions will result but whatever happens eventually, we have already achieved a “coming together” of an otherwise apparently disparate group of technologists that now know they have shared knowledge and problems and who know each other! SAL’s client is committed to running a number of these events throughout this year on various other subjects. If each one is as successful as this, we may have a new innovation paradigm on our hands. Strategic Allies Ltd is currently working to replicate its own version of this model internationally.

Whereas a conventional 3D printer could cost anything from $30,000 plus, the Reprap machines cost as little as $700 and, most importantly, can be used to make other Reprap machines and hence perpetuate almost organic growth of the available worldwide 3D printing capability.By sharing ideas through open source design and making use of other sharing websites e.g. www.thingiverse.com, Makers are using these machines, and other techniques, to bring ideas to life through rapid prototyping and developing sustainable, small scale manufacturing capability.

So who are Fixers? Fixers on the other hand have a different agenda and appear to resemble everyday Eco-Warriors who are taking practical steps to extend the life, and therefore the sustainability, of commonplace items. Rather than throw away an electric kettle because “it has stopped working”, why not find out “why it has stopped working” and repair it? A new element will cost less than a new kettle and doesn’t come with the packaging and delivery ‘carbon footprint’ miles of a new kettle too so overall far more sustainable…?

These cultures have been associated with a growing social rejection of what some consider to be “built in obsolescence” in many of today’s consumer items. Fixers share much of the mentality of Makers etc in that they are practical, or want to be, and take personal pride in making something work. Indeed in all these groups there is as much importance placed on social cohesion and learning, as there is on construction and fixing. These Artisan Engineers are now gathering together in community-operated “spaces and places” that are springing up around the world dedicated to their pursuits. So “equipped” Hackerspaces, Fablabs and Repair Cafes are becoming the domains of these groups where they can physically work on their own and the ever increasing number of “collaborative or shared” projects such as Zoybar www.zoybar.net , an open R&D Lab for professional and hobbyist musicians to easily create, customize and fabricate their own musical instruments and applications. Numbers of such venues in the world have increased from fewer than 20 in 2005 to over 1000 today.

Professor Martin Charter and Scott Keiller of CfSD have recently tried to “locate and quantify” these Makers/Hackers and Fixers through a questionnaire sent to numerous Hackerspaces and Repair cafes around the world. The complete findings can be found at http://cfsd.org.uk/research but here I have several “top line” findings which are of interest and I am indebted to CfSD for the insight they provide.

Reasons for Participation at the Hackerspace

The Next five years………

Additionally nearly 40% of respondents strongly agreed or agreed that they expect their “Hackerspace will provide space & support for new business start-ups.“

158 responses were received from participants of 136 named Repair Cafés from 9 different countries. By far the majority of the responses came from Netherlands with 104, Germany presented 31, UK 9, Belgium 7 and USA 3.

Reasons for participation at the Repair Café

Who currently makes money from this movement?

So we now have a better idea of who and where some of these Innovators reside, and what motivates them but what sort of Business Models are being developed by, or to suit, them?

The Hackerspaces and Repair Cafés tend to run on a small subscription model but are almost all really run on a “not-for-profit” basis relying on the originator’s vision and various individuals volunteering to provide the facilities for the community. Obviously some businesses emanate from the individuals who use these “spaces” and these tend to be on a standard invoice for products basis but there are some more “interesting” ideas around. IFIXIT www.ifixit.com is an American business that has been at the forefront of the Fixer movement for some time now. They have tried several models starting with monetarising the publication of repair manuals to their current model that is far more ingenious. With its public manifesto that all products should have a free manual readily available to consumers, IFIXIT provide spare parts, ‘special’ tools and customised project mats with assigned compartments to ensure “fixers” don’t loose special components. Espares http://www.espares.co.uk provide parts only, having played with other models previously and Sugru http://sugru.com/story have developed and marketed a self-setting rubber, see pic above, that can be formed by hand, moulds like play-dough and bonds to almost anything, turning into a strong, flexible silicone rubber overnight. The perfect “fixer material.”

It appears that the evolving community of Makers, Fixers and Hackers are certainly the prototypers of today and maybe strong practical Innovators of tomorrow. The democratizing of innovation is a strong theme within these communities. They believe that Innovation is everyone’s right, and possibly their responsibility too, i.e. not only for the tech directors of the well-known corporations.

Strategic Allies Ltd’s continuing belief is that each can benefit from the other.

We’re connected with various organisations involved in the Innovation community worldwide & will be doing “shout-outs” for a selection of these – today it’s Tandem Launch….

Makers, Hackers, Fixers…. or are they all just “Innovators?”

What is this new culture and are the participants a real source of innovation?